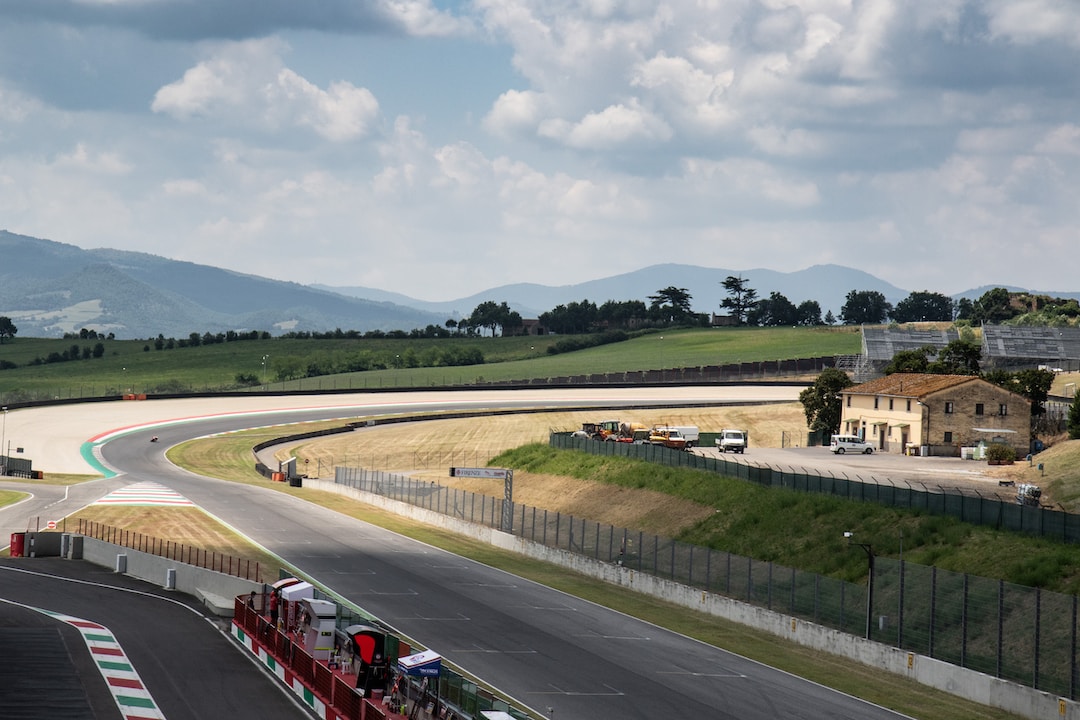 Last week’s Formula 2 round at Monza saw Mick Schumacher take the Feature Race win, with pole-sitter Callum Ilott finishing 6th, before finishing second on the road on Sunday’s Sprint Race, subsequently being promoted to first place. This came after Dan Ticktum was disqualified for not providing a sufficient post-race fuel sample due to a leak in the spec fuel tank.

The Autodromo Internazionale del Mugello, more commonly known as simply the Mugello Circuit is located in the Scarperia e San Piero, Tuscany, Italy, on the outskirts of Florence. The track has a length is 5.245 km (3.259 mi), comprising of 15 turns and a 1.141 km (0.709 mi) long straight. The track is owned by Ferrari, and is no stranger to Formula One, having been used for a mid-season test in 2012. Formula 2 however, has never run a test session or race at Mugello.

Owing to the twisty nature of the track, a single DRS zone will be available for use, the start-finish straight.

The Things to Watch Out For:

How much or how little overtaking will we see at Mugello? Ahead of the inaugural Tuscany Grand Prix, Formula 1 drivers have mentioned a lack of overtaking zones on the track, with Lando Norris being one of the first drivers to speak out about the issue.

In late July, Norris had stated in an interview with Autosport that the quick corners would be a physical challenge for drivers, mentioned the lack of an obvious passing opportunity. He also expressed doubt that there would be any overtaking outside of the main straight, comparing the track to the Hungaroring.

Daniel Ricciardo was another F1 driver who chimed in on the issue of overtaking at the track, stating: “For racing, it’s difficult to know where it’ll be good to overtake in these current cars,” The Austrialian did, however, identify the long Turn 1 as a possible location for overtakes.

Unlike Formula 1, Formula 2 does not face the same overtaking issue caused by dirty air, owing to the simplified aerodynamics and spec car, which means the car design can be optimised to allow for less dirty air in a car’s wake. This should potentially allow for a larger number of overtaking points on the track, compared to Formula 1.

Can Marcus Armstrong finally deliver? The young New Zealander has scored zero points since his last podium finish in the feature race at the second round of the season in Austria, struggling massively at each round. In contrast, his teammate Christian Lundgaard has finished strongly at every round this season, scoring points on a regular basis, and scoring 5 podiums, including a sprint race win. His fellow Ferrari Driver Academy who stood on the podium with him at the season-opening Feature Race have also gone onto score points and podiums on a regular basis, and are now contending for the podium.

While Armstrong’s sudden lack of performance following the 2 Austrian rounds may be surprising, there may be other factors in the background that could have led to it. This is especially when one is to look at ART Grand Prix’s finishing record in the past few seasons. 2018 & 2019 saw ART secure the driver’s title, with George Russell & Nyck de Vries. However, their respective teammates, Jack Aitken & Nikita Mazepin, both GP3 runner-ups in the previous years, finished nowhere near them in the final standings. Aitken, 2017 GP3 runner-up finished in 11th with 63 points and 2 podiums, including a win. Mazepin, 2018 GP3 runner-up finished far down the order in 18th, with a mere 11 points and no podiums. Both drivers saw a substantial increase in their points tally subsequently, with Aitken scoring 159 points and finishing 5th with Campos Racing in 2019, while Mazpin is currently 6th in the standings with 102 points and 3 podiums, including a feature race win.

Will DAMS’ season finally see some improvement? The French squad has had to endure a torrid season thus far, with the 2019 teams’ championship winners struggling with a lack of consistency, alongside reliability issues. The reliability issues came to a head last week at Monza, where a leaky fuel cell caused the team & driver Dan Ticktum to be disqualified from the Sprint Race, costing team and driver the race victory.

Ticktum starts today’s feature race on the front row in 2nd, his best result of the season in qualifying, but questions remain as to whether the DAMS’ fortune can improve from this point. The team’s now-failed title defence has not been helped by having just a single car in the points each weekend, with the #1 car failing to come into the points regularly. The #1 car was originally driven by the now-injured Sean Gealel, who only managed to score 3 points until his injury at Catalunya forced him onto the sidelines. The car is currently occupied by reigning FIA Formula 3 Champion Juri Vips, but Vips has struggled to score any points thus far, finishing 11th in both races at Spa, and finishing just outside the points in both races in Monza.

A gap of 29 points separates the top 5 in the Formula 2 Driver Standings ahead of the Mugello Feature Race, with all 5 drivers currently signed to the junior programmes of Formula 1 teams. The top 2 drivers in the standings, are once again Ferrari juniors, this time Callum Ilott and Mick Schumacher, who had a strong weekend at Monza. The pair are separated by 6 points, and are trailed by former championship leader, and fellow Ferrari junior, Robert Shwartzman with 140 points. Red Bull/Honda junior Tsunoda (Rookie) sits in 4th with 123 points, and Renault junior Christian Lundgaard in 5th with 111 points.

All 5 come into the Feature Race with different amounts of work to do on track today, given the nature of the circuit. Lundgaard starts the race from Pole, with Ilott in 3rd, while Schumacher, Shwartzman and Tsunoda find themselves further down the grid with a great deal of catching up to do. Shwartzman starts in 9th, while Tsunoda starts in 11th and Schumacher in 15th.

While the Formula 2 Drivers’ Championship has proven extremely competitive this season, the same cannot really be said for the Teams’ Championship, which appears to be becoming a 2 horse race between Prema & UNI-Virtuosi. 31 points now separate the 2 teams in the standings, up from 20, while the gap to next nearest team, Hitech Grand Prix has grown from 50 points, to a whooping 76 points behind Virtuosi.

Both teams are running with strong driver lineups, comprising of Formula 1 Junior Drivers. UNI-Virtuosi runs Guan Yu Zhou (Renault) & Callum Ilott (Ferrari), while Prema run a full Ferrari lineup of Shwartzman & Schumacher. UNI-Virtuosi had looked strong in the pre-season Bahrain tests, but at the present, Prema appear to have the upper hand in the Teams’ title battle, with their increased margin in the lead being a sign of this. The Prema duo of Schumacher and Shwartzman have made more visits to the podium combined, compared to the Virtuosi pair of Zhou and Ilott.

As mentioned earlier, however, the teams’ title fight could easily swing in favour of Virtuosi, should there be any further incidents between the Prema pair…

The Battle for an F1 Future

The Drivers in the 5 face different futures in Formula 1. Tsunoda seemingly has his F1 future set in stone, should he acquire sufficient Super License points, the same cannot be said for his title rivals.

Lundgaard faces a wait on the sidelines for a potential seat in 2022, while the 3 FDA drivers Shwartzman, Ilott and Schumacher currently find themselves locked in a battle, not just for the championship, but also for the single Ferrari seat at Alfa Romeo. In addition, Shwartzman and Schumacher are also teammates at Prema; with both drivers aiming for a Formula 1 graduation, things could turn ugly at the Italian squad.

Shwartzman and Schumacher had already come together on track once, during the second Sprint Race at Silverstone, which cost Prema a 1-2 finish, with just 2 laps to go, gifting a win to Tsunoda and Carlin. Schumacher would finish 2nd, while Shwartzman plummeted down the order with Front Wing damage. While the stewards deemed it a Racing Incident, and Schumacher was apologetic about the incident, there is every possibility of a repeat incident occurring on track…

Meanwhile, Ilott may find himself away from any intra-team competition for the sole Formula One seat at Alfa Romeo held by Ferrari, but time is running out for the young Englishman. In mid August, Ilott admitted to Formula Scout that he had yet to engage in discussions with any team for a Formula One graduation.

All 3 title contending FDA drivers are assets to Ferrari’s academy which the Scuderia hopes to retain. However, Ilott has to recognise the reality that he could see the Formula One dream fade in front of him, should he fail to secure the title or beat both his rivals. Schumacher is an incredibly marketable driver owing to his surname, while Shwartzman’s past and current performances have indicated a driver of high calibre and potential. In the event where only 2 of the 3 drivers may be promoted to Formula 1, Ilott could find himself as the driver left out of a Formula 1 promotion.

This site uses Akismet to reduce spam. Learn how your comment data is processed.